Boca Raton Regional Hospital is entering its most important year since the hospital’s founding in 1967.

By the end of 2019, Boca Regional will have started work on a $500 million-plus expansion, approved a partnership that will make Baptist Health of South Florida the parent corporation and hired a new CEO. Transformative doesn’t begin to describe it.

Three weeks ago, the hospital announced what CEO Jerry Fedele called the “hard launch” of the quarter-billion capital campaign that will support the building program. Boca Regional already has raised nearly half that amount— $115 million—from large donors. During an interview last Friday, Fedele said “several large gifts” are in the works, but the focus from here will be more “broad based” and seek to find new donors and previous contributors who might give more. A hospital spokesman said the campaign would run for “no more than 24 months.”

Work will start first in March on the parking garage, which will have nearly 1,000 spaces and replace the outdated surface lot. The next step, which Fedele should begin in late spring or early summer of next year, will be the new patient tower. The current tower will be gutted and renovated. There will be more operating rooms. Another project is a new power plant. 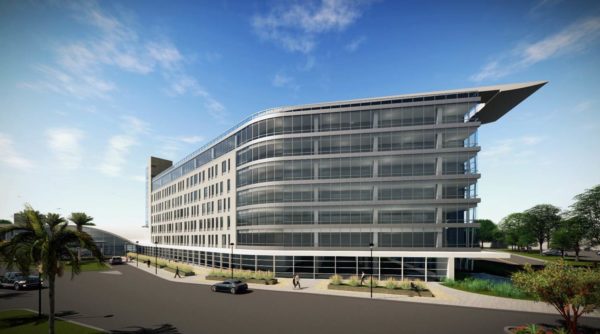 Boca Regional also will get bigger. The hospital is licensed for 400 beds, though a spokeswoman said it operates at 365. After the construction, the hospital will have between 420 and 450 beds. Fedele estimated that the construction program would take five to six years to complete from the March start date on the garage.

Meanwhile, Boca Regional remains on track to approve by June 30 its deal with Baptist Health. Two weeks ago, the hospital held a public meeting to address questions about the merger. Longtime donors Christine Lynn and Dick Schmidt joined Fedele in briefing residents and taking questions.

On social media, some residents had expressed concern about the hospital’s future under Baptist. But Fedele said community support has been “better than I expected.” One resident, Fedele noted, called the meeting “anticlimactic,” because Boca Regional has been open about the partnership since going public in July 2017. Several weeks ago, an advisory committee of physicians got the same presentation.

At first, Fedele recalled, public reaction to the search for a partner presumed “that there must be something wrong. But we’ve always said that we were approaching this from a position of strength. I give a lot of credit to the board” for delivering a consistent message.

During conversations with potential donors, Fedele said, “We bring it up,” referring to Baptist. Some ask “if we still need their money.” Fedele told me earlier that Baptist will help with the capital campaign, but he and board members have stressed that donations to Boca Regional would stay with Boca Regional.

The process to choose Fedele’s successor also continues. A search committee has identified what Fedele called “a number of candidates.” Interviews will begin soon. Fedele predicted that the decision could come in April or May, which would give Fedele time to work with the new CEO before he leaves in August. Fedele had planned to retire last August—after 10 years—but the board asked him to oversee approval of the partnership.

Baptist Health has a representative on the search committee, whose members want to find the candidate best equipped to lead Boca Regional into a new era. In six years, it will be a transformed hospital that supporters hope will retain the community spirit that created it.