All Aboard Florida added another piece of land to its downtown West Palm Beach cache with the $860,000 purchase of a plot of unused space from Florida Power & Light.

The property, which is just north of where the express passenger rail project plans to have a station, was purchased in April by a company called Land Parcel FLL, LLC. The company incorporated March 25, according to state records, and has All Aboard Florida executives and Florida East Coast Industries listed at its “authorized persons.”

Florida Power & Light sold the parcel to All Aboard Florida, and will maintain a substation on land to the west, said FPL spokesman Bill Orlove.

West Palm Beach city officials knew All Aboard Florida was interested in the property but didn’t know they had finalized the deal, said city spokesman Elliot Cohen.

All Aboard Florida has already amassed about two acres downtown with the purchase of a vacant Sewell Hardware building, and property in the Evernia and Datura street blocks between Quadrille and Rosemary Avenue. The new station will close off Datura and Evernia streets at Quadrille Boulevard _ a main thorough fare through downtown that runs by the county courthouse, city library and city hall.

Although All Aboard Florida plans to unveil the designs for the $29 million station this month, Cohen said the city has yet to see those plans. The city is asking the private company to pay for two pedestrian bridges and an access road to relieve congestion anticipated by the road closings.

fpl land sale to all aboard floridaThe access road would go through the land bought from Florida Power & Light and two privately owned parcels.

The trains, which will travel up to 79 mph between Miami and downtown West Palm Beach, and up to 110 mph north of West Palm Beach to Cocoa, will make the trip to Orlando on the Florida East Coast Railway tracks in three hours. 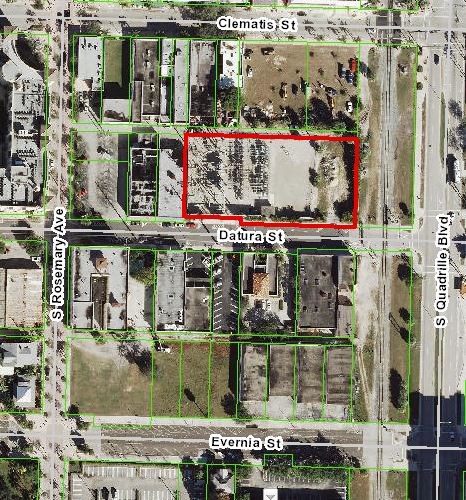 Next Changes Underway For Deciding What Goes Up In Boca Raton

Previous Proposal Would Speed Up Review Of Boca Development